Survey is a game loosely-based on the popular “Family Feud” game show.

Survey is a fast-paced game – instant scoring moves the game along, no waiting several minutes for the host to “grade the
answers” AND the scoreboard is updated after each response. Music is played between the surveys, keeping the energy level elevated.

Teams can’t cheat with Survey, the object is for their team to match the most popular response from a survey to get the points,
so there is more social interaction among the players.

Why Survey is NOT like Trivia:
“They have too many players on their team.”
Not an issue with Survey, more players doesn’t translate to an increased chance of success.
You can have 1 or 21, we don’t care.

“The same teams win every week.”
Then it would just be lightning-strikin’ luck because Survey is not about what you know or remember,
it’s your best guess of what other people have said in a survey. 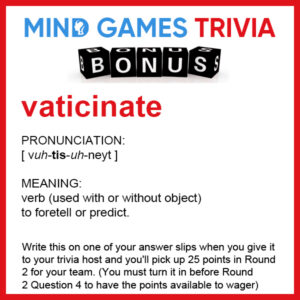 1) Establish your home venue
2) Play with the same team name each week so your scores can be tracked
3) We will only count the top ten scores towards qualification for post-league play, so if you miss a week or two for some reason or wager all your points one week and lose them, you’ll be ok.
4) In August we will start a bonus program where you will get some league points for playing at venues other than your home venue during league play. More details on that next week.